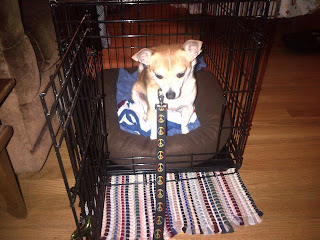 After a 20 hour work day yesterday, I was so excited to come home to Toby. But, what I wasn’t happy to see was that he was still limping and refused to come out of his crate. He was, however jumping around in his crate and pawing at me through it.

He seems better — he’s walking, putting pressure and laying on it — but I can tell he’s still not totally OK, or back to normal. My Dad said he was whining and hitting the crate really hard yesterday afternoon. He had already taken him out, so he asked if he wanted more water. Toby barked and pawed at the crate again. He opened it, and Toby headed toward the water, but then made a quick turn and tried to jump on the couch, which was covered in sun — Toby’s favorite thing.

While that’s a good sign, I realized this morning that I left his crate open last night. And, he didn’t once try to jump up on the couch and snuggle with me at all during the night — which is very unlike Toby. I think it might be time to take him to the vet very soon.

13 thoughts on “Wordless Wednesday: I’m Not Coming Out of Here”

My Tail Hurts From Wagging So Much

My Tail Hurts From Wagging So Much